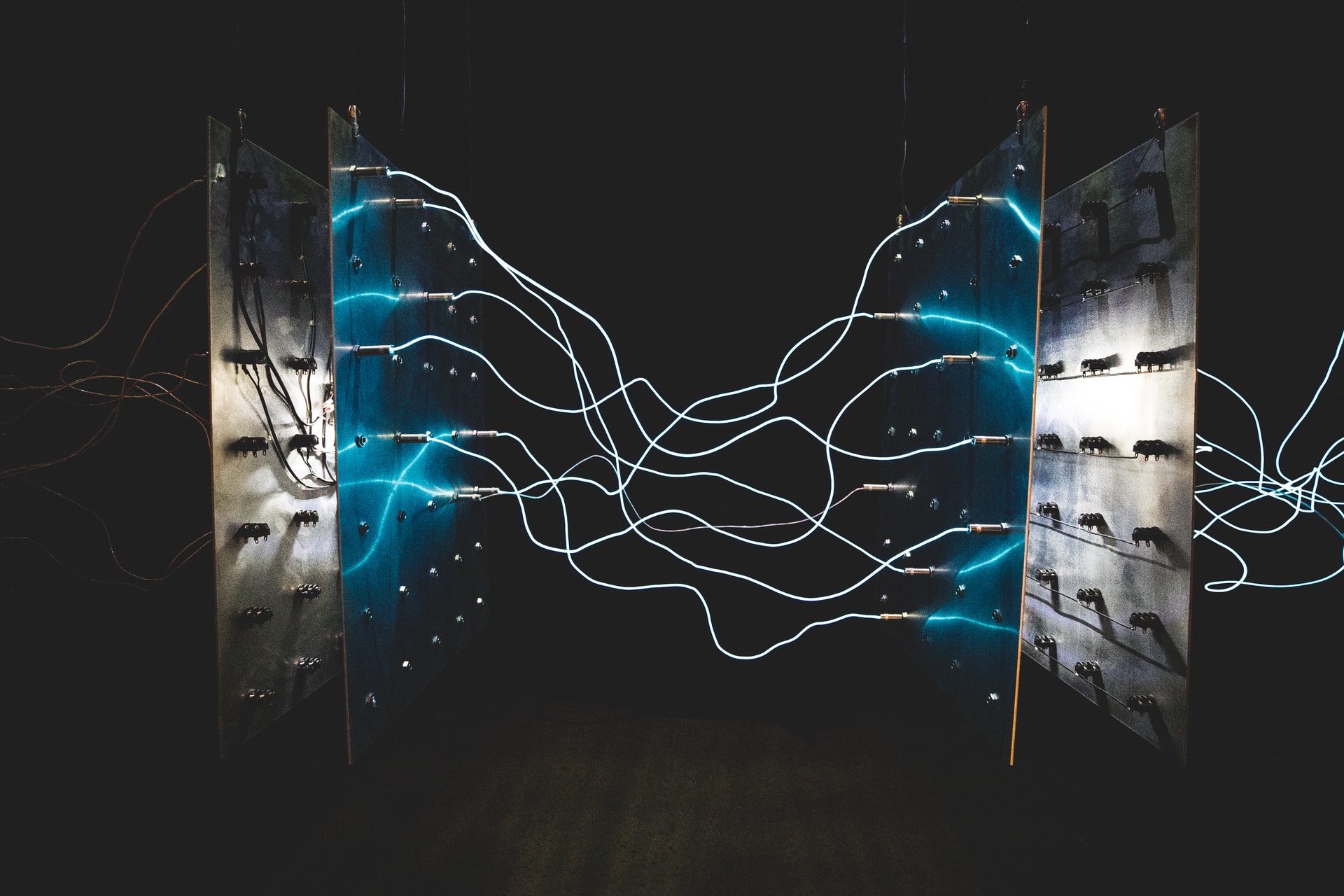 There is no shortage of protocols in electric vehicle charging. Why do we need one more standard? Could we use other APIs to overcome the problem OCPI is solving? And does it represent a threat or an opportunity for different players in the electromobility market?

Why roaming is a problem in electric vehicle charging?

Public electric vehicle charging is growing rapidly: many companies are rolling out charge points especially in densely populated areas. The owners and operators of these charge points are called CPOs or Charge Point Operators. Their role is to plan to charge networks, build, operate the chargers, maintain, and otherwise ensure that the physical infrastructure is available for drivers.

The drivers of EVs then use a contactless tag or an app to start charging and manage their accounts via a mobile app. The provider of the charging service to the end customer is called an EMP or electromobility provider (the OCPI documentation uses the term eMSP, eMobility Service Provider, for this role). In practice, many companies involved in the electromobility business take on more than one role, some also beyond the two described here – many CPOs are also energy companies, electricity distribution companies, or control the locations.

For drivers, the patchwork landscape of EMPs presents an inconvenience; myriad apps are needed both to discover chargers and pay for charging, each requiring the user to create credentials, input their payment details and some of them charge the user a monthly fee too. This is in stark contrast to internal combustion engine refuelling, where a single payment method, the humble credit card, effectively covers the entire world.

The problem is not new, multiple attempts at solving it has been made before from proprietary or national starting point. Hubject, Gireve, and Plugsurfing for example established their meta-networks encompassing charging points from different charge point networks, but implementing the different protocols proved expensive and in some cases ownership changes in the platform caused some CPOs to view them as competitors rather than partners.

OCPI attempts to standardize the connectivity between charging networks, allowing sharing of the charging stations of one network with others. Unlike previous attempts at roaming, the organization managing the development of the protocol does not itself operate a roaming hub or have a commercial role in electric vehicle charging. This strategy has been very successful, and many companies (including eMabler and many of our partners) have chosen to select OCPI as their primary integration technology.

Some of the common use cases for OCPI include:

The business impact of OCPI and roaming

OCPI makes it easy for various players to share the scarcest resource in EV charging – operational charging points. For CPOs then, OCPI is almost nothing but a positive development: they can expect the utilization rate of their charging network to increase, as the number of potential customers from various EMPs increases.

For pure EMPs, however, roaming can be a double-edged sword. Until now, a key deciding factor for drivers has been the coverage of the charging network provided and larger players have had the advantage. OCPI makes it easier for smaller players to extend their network coverage with roaming agreements and compete with better user experience, innovative models and often lower end-user pricing.

The key competitive advantage of an EMP will be their existing user base, but this too presents a risk: an existing application developer in an adjacent field with a large user base might begin to compete with existing EMPs by including EV charging functionality in their app. How long will it take until Google Maps will provide EV charging locations and payment directly from their user interface?

For the EV driver, the consolidation of charging payments into their preferred EMP app will be a positive thing, but how will drivers compare the various EMPs in the future? The pricing for a roaming customer at a charging station might vary wildly from one station and network to another, depending entirely on the roaming agreements made by their EMP. The pricing is unlikely to be static either and might be dependent on electricity market price, the utilization rate of the charging station, time of day, or any number of other – to the driver opaque –  variables.

Notes on OCPI technology and implementation

The next section of the article is intended for a somewhat, technical audience. Therefore, if you are a reader with a purely business interest in roaming and OCPI you can safely stop reading here.

OCPI is developed by the EVRoaming Alliance and the protocol definition is available for free even for non-members https://evroaming.org/downloads/. The current version of OCPI at the time of writing is 2.2, with version 3.0 under development. The protocol is based on REST/JSON calls and provides a very broad set of functionalities.

When to use OCPI over custom APIs is a complex question, the broad functionality makes the protocol somewhat onerous to implement the first time, but subsequent implementations are fairly repeatable and most use cases don’t require the implementation of the full suite of functionality. At eMabler, we don’t always use OCPI even when it’s available from our partner companies, the consensus-based development model makes it impractical for collaboration where either the roles of the parties don’t fully conform to OCPI use cases or where we wish to work together to come up with innovative new models. OCPI does however present a good default option to consider. 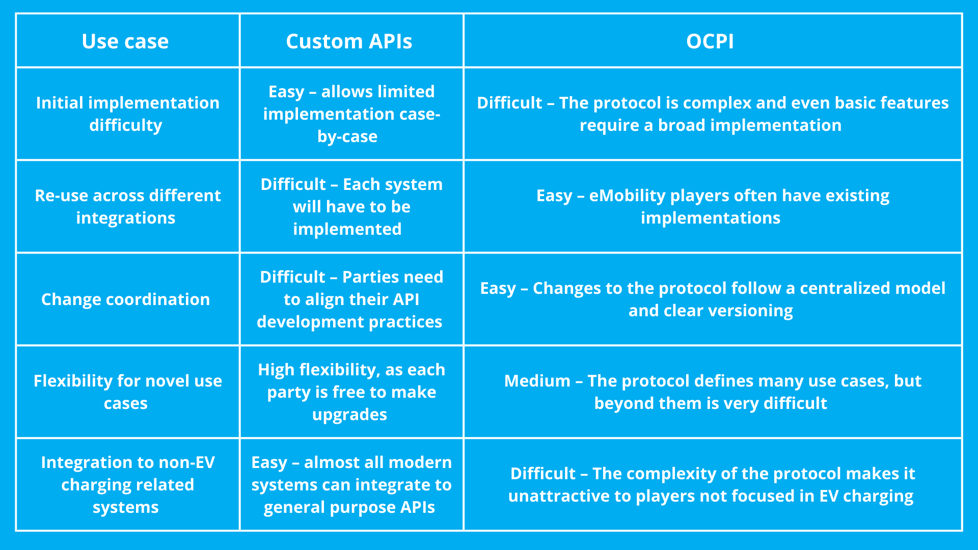 OCPI vs. other roaming protocols

To better understand the differences between the different roaming protocols and their governance models, a research group at the University of Eindhoven prepared a robust analysis, which is summarized in the below table. You can read the entire report here.

The fact that OCPI is not an open-source protocol may be a cause of concern for some. It might seem like the protocol isn’t as open as some of the others, but the choice is strategically sound. The no-derivatives clause in the license ensures that incompatible versions of the standard don’t appear and make integrations difficult for everyone.

When implementing OCPI, the most important consideration is to identify which use cases of the full suite are required to satisfy your needs. The Supported Topologies section of the OCPI documentation gives a good overview of the various roles on a system level. It’s also a good idea to look at the different functional modules and evaluate which ones are needed, the section Typical OCPI implementations per role give a good overview, but assumes a broad range of functionality by default.

That's why we decided to build an open platform that lets you integrate your EV charging data into any existing systems, please contact us. 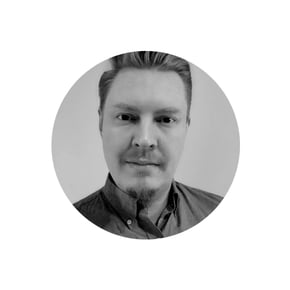 Why is paying for EV charging so hard?

Just take my money, but please make it easy! Paying for electric vehicle charging outside your usual spot can be a chore.
Start Reading
Ville Parviainen 18/06/22 18:59 14 min read

What is a good EV charger? In this post, I disclose the features that make a good electric vehicle (EV) charging device. I’ll ...
Start Reading